Antimony Metal - What you need to know

Antimony is a semimetallic chemical element which can exist in two forms: the metallic form is bright, silvery, hard and brittle; the non metallic form is a grey powder. Antimony is a poor conductor of heat and electricity, it is stable in dry air and is not attacked by dilute acids or alkalis. Antimony and some of its alloys expand on cooling. Antimony has been known since ancient times. It is sometimes found free in nature, but is usually obtained from the ores stibnite (Sb2S3) and valentinite (Sb2O3). Nicolas Lémery, a French chemist, was the first person to scientifically study antimony and its compounds. He published his findings in 1707. Antimony makes up about 0.00002% of the earth's crust.

Antimony and its compounds were known to the ancients and there is a 5,000-year old antimony vase in the Louvre in Paris. Antimony sulfide (Sb2S3) is mentioned in an Egyptian papyrus of the 16th century BC. The black form of this pigment, which occurs naturally as the mineral stibnite, was used as mascara and known as khol. The most famous user was the temptress Jezebel whose exploits are recorded in the Bible. Another pigment known to the Chaldean civilization, which flourished in what is now southern Iraq in the 6th and 7th centuries BC, was yellow lead antimonite. This was found in the glaze of ornamental bricks at Babylon and date from the time of Nebuchadnezzar (604561 BC). Antimony became widely used in Medieval times, mainly to harden lead for type, although some was taken medicinally as a laxative pill which could be reclaimed and re-used!

Antimony is used in the electronics industry to make some semiconductor devices, such as infrared detectors and diodes.It is alloyed with lead or other metals to improve their hardness and strength. A lead-antimony alloy is used in batteries. Other uses of antimony alloys include type metal (in printing presses), bullets and cable sheathing. Antimony compounds are used to make flame-retardant materials, paints, enamels, glass and pottery. 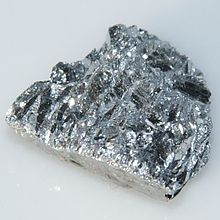