‘Casting’ is a process used in metalworking where a metal in liquid form is poured into a mould and allowed to cool in the cavity to form a specific shape. It is a commonly used process for making complex shapes as the use of the mould allows for great detail and it is more economical than other processes might be. Once the metal has solidified it is removed from the mould and is known as a casting. Items commonly produced by casting include pieces of jewellery, sculptures, tools and some weapons.

The process of casting has been used for thousands of years, but it has been steadily refined and modern casting can now be broken down into two distinct sub-categories – expendable and non-expendable casting. In the expandable casting process, a temporary mould is used that cannot be reused, whereas in non-expendable casting the mould can be reused. This is then further differentiated by which material and which pouring method is used.

There are a variety of materials that can be used for casting, including non-metals such as sand and plaster. If using metal, the most common ones are iron, aluminium, steel, copper and zinc. When casting metals, a non-expendable method of casting is commonly used. For example, permanent mould casting uses a reusable mould, usually also made of metal, to cast metals such as iron, zinc, tin, aluminium and copper, amongst others.

Usually, gravity is used to fill the mould, but vacuum or gas pressure can also be used. Another popular method is die casting which pushes molten metal into a mould using high pressure. Die casting usually uses non-ferrous metals such as zinc, copper and aluminium alloys, but it is also possible to use ferrous metals, although they are less common.

It is possible for defects to occur during the cooling period, also known as the solidification process, such as gas porosity and solidification shrinkage. Because of the nature of the casting process, it is difficult to do anything to prevent these from occurring so proper steps should be taken throughout the process to combat these. Shrinkage, for example, usually happens when the metal cooling in the mould is less dense in its liquid form, meaning as it cools to a solid the density decreases. In order to prevent this a suitable metal should be used. 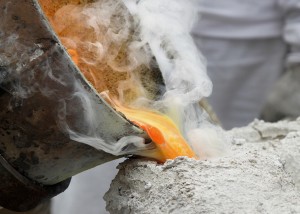