The History of Tin Mining in Britain

Tin mining in Britain has been occurring since before the Bronze Age – as tin is an essential component to smelt bronze there could not actually have been a Bronze Age without it. Two of the main areas for this were Cornwall and Devon, both of which provided most of the tin, copper and arsenic used in the UK up to the 20th Century.

The existence of tin in Britain can be traced back to 2000 BC alongside the tin trade developing in the Mediterranean at that time. Tin mining in Cornwall, however, did not begin until approximately 1800 BC. The county became an important producer of tin, to form bronze when mixed with copper.

Early tin was produced from rich alluvial deposits, mainly found in West Cornwall, as well as St. Austell and Bodmin. Tin ore would be washed up into the moors and valleys and the ore extracted from there. However, the invention of steam power in the early 19th Century was what really propelled Cornwall to the forefront of the tin mining industry. At its height, there were around 600 steam engines in the Cornish mines. Removing water from deep mines was a huge problem, and also limited the depths of a mine. Using steam power, the Cornish Beam Engine was produced which could be used to drain water from the mines. Many of the mines found in Cornwall during this period reached down to great depths with some under the sea.

Cornish tin mining reached its height in the 19th Century. Notable areas include Caradon Hill, which housed the most productive mine in East Cornwall, Gwennap, St Day, Porthtowan and Kit Hill Country Park. As the industry began to decline during the latter part of the century many of the Cornish workers emigrated to developing mining areas overseas including Australia, North America and South Africa. In 1875 over 10,000 miners left Cornwall to find work overseas.

Although some mines were reopened during the 20th Century, none remain open today. The Great Tin Crash of 1985 brought about the end of tin production in Cornwall with the price of tin during that year dropping from £10,000 a ton to just £2,000. The last tin mine in Cornwall to be in production was South Crofty which closed in 1998.

In July 2006 ten mining districts in Cornwall and Devon were recognised as World Heritage sites by UNESCO, an important acknowledgement of the key role played by Cornwall in the development of mining technology and its further reach across the rest of the world. 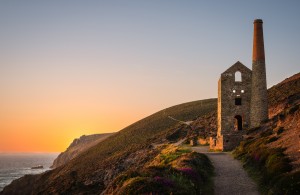