The History of Metal in Sheffield

The city of Sheffield is well known for steel manufacturing and metallurgy. From the 18th century onwards it was quickly established as one of the main industrial cities in the UK, although it was recognised for the manufacture of knives as early as the 14th century with a notable mention from Chaucuer in The Reeve’s Tale.

Ay by his belt he baar a long panade,

And of a swerd ful trenchant was the blade.

Ther was no man, for peril, dorste hym touche.

A Sheffeld thwitel baar he in his hose.

Round was his face, and camus was his nose;

The location of the city, situated amongst a multitude of rivers and streams, made it ideal for water powered industries to flourish and in the 1600s, Sheffield became the hub of cutlery production in England, outside London. In the 1740s, Benjamin Huntsman, who lived just outside Sheffield in the town of Handsworth, invented a version of crucible steel process that would produce better quality steel than had previously been possible. His method involved a coke-fired furnace that could be heated to a staggering 1,600 degrees °C. Clay crucibles would first be heated, before adding an alloy of carbon and iron known as blister steel. After 3 hours in the furnace the pots were removed, and impurities skimmed off, before the molten steel was cast and cooled.

Also notable at this time was the invention of Sheffield plate by Thomas Boulsover, a combination of layers of copper and silver that is very strong and was used to produce a multitude of household goods. Because there was a large amount of copper, covered with a thin coating of silver, items were able to be produced at a far lower cost than if they were made only of silver.

In 1912, Harry Brearly discovered stainless steel in his research laboratory based in Sheffield. The metal was marketed as Staybrite in England by Firth Vickers and was used in the new entrance to the Savoy Hotel in London in 1929. Although when he applied for a US patent Brearly found that someone in the US had already registered one, he was able to join forces with Elwood Haynes to create the American Stainless Steel Corporation.

As steel began to be mass-produced the population of the city grew exponentially from the 18th to the 20th century, going from 60,995 in 1801 to 577, 050 in 1951. Although the industry has since declined Sheffield is still recognised as a key contributor to the metal industry and continues to manufacture specialist steel today. 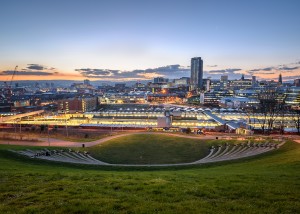