THE USE OF METALS IN AIRCRAFT MANUFACTURE

The metals used in the aircraft manufacturing industry include steel, aluminium and titanium with each possessing certain qualities that make them ideal for this use. Aircraft construction demands materials that are both durable and lightweight, as well as being able to withstand severe pressure at high altitudes, and exposure to the elements.

An aircraft is built with a number of major components such as fuselage, wings, undercarriage etc. and different components can be made of different materials, depending on what the function of the component is and what characteristics are most important for it to be able to work correctly.

The Wright brothers' first aeroplane, which first took off in 1903, had a 30 pound aluminium block in the engine. Since then, aluminium has become a highly popular material in the manufacture of aeroplanes due to a combination of low density and high strength properties making it ideal for mass-produced commercial aircraft. Aircraft manufacturers prefer to use high-strength aluminium alloys (primarily alloy 7075) to strengthen aluminium aircraft structures. Alloy 7075 has copper, magnesium and zinc added for extra strength. Aluminium typically comprises around 80 percent of an aircraft's weight (unloaded) and because it is highly resistant to corrosion, it can be left unpainted. At high temperatures, however, aluminium can lose strength so it is not used on the skin surface of an aircraft.

Steel can be up to three times stronger than aluminium, although it is also heavier. It's strength, hardness and resistance to heat make it ideal for use on the skin surface of the aircraft and in the landing gear and it typically comprises around 11-13 percent of the materials used in an aircraft. The durability of steel is its most important characteristic in aeroplane manufacture and although it is heavier than other materials like aluminium it is often used for hinges, cable and fasteners where its strength is key.

Although expensive, titanium is commonly used in aircraft manufacture due to its excellent properties including high strength, high temperature resistance and high corrosion resistance. Titanium is commonly used in a variety of different parts on an aircraft both on the exterior and in the engine. It can be found in the wings and landing gear as well as the housing, fan blades and pumps within the engine. As titanium becomes more widely used the cost is expected to drop which would make it the metal of choice in the aerospace industry. Presently, the costs associated with titanium mean it is not feasible to use for widespread use throughout the aircraft.

Nickel alloys are popular in aerospace engineering due to their ability to resist high temperatures and corrosion they are structurally tough and have fantastic creep resistance properties. They are often used to make the turbines of aeroplane engines due to the immense heat this part of the engine is exposed to. Because nickel alloys retain their strength at elevated temperatures they are perfect for this function. In addition to this, you can find nickel alloys in the exhaust valves, thermostat rods, tanks and piping for liquefied gas storage. 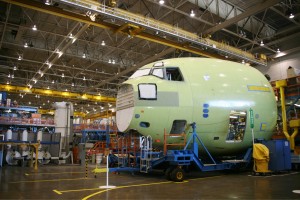