Historically, different precious metals have been used to make coins used for currency. Indeed, before there were standardised currency systems with coins, metals themselves were used on their own as a precious commodity representing value typically those considered precious metals such as gold and silver.

Historical records show that gold was used for accounting in Egypt during the third millennium BC, and silver in Mesopotamia.Coins can be found in many ancient cultures with the earliest coins thought to be made from electrum, a naturally occurring alloy of gold and silver, and traced back as far as Ancient India circa. 6th century BC. In Western records, the earliest coins are probably those traced back to Lydia circa. 680 BC. They were made from electrum and fashioned in ovals.The traditional coinage system in Britain is derived from the Medieval monetary reform of Charlemagne, much like the French monetary system. The reform fixed a ratio of 12 to 1 on the price of gold to silver, with the aim that basic coins of the same weight were equally suited as a currency standard gold coins were much more valuable and rarely seen by most. Over the years the monetary system used has evolved and changed multiple times to get where it is today.

The metals used have also changed, from gold, silver and copper, to bronze, brass and silver alloy.Today coins are typically made from less precious metals nickel plated steel and copper plated steel maybe, depending on the coin. The process of making them involves three distinct phases making the blanks, making the dies and striking the coins. First, the metals to be used are melted and then extracted in a continuous strip, before being rolled out to the thickness intended for the coin. Out of this 'sheet', the blank coins are cut and then softened in an annealing furnace, as the process of rolling the metal out makes it very hard.

Once cleaned, the blanks can be used. Next, a plaster model is made with the agreed design and then scanned by a probe to make a digital record. The design is then engraved on to a piece of steel at the size the coin will be and this is used to make the dies which will strike the coins. Finally, the blanks are put into a coining press where the dies will strike them, applying a pressure of about 60 tonnes, and they will be turned into coins. 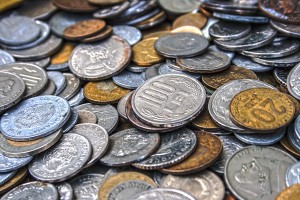